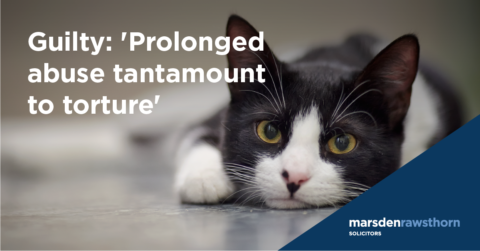 A couple has been banned from keeping animals for life after causing ‘prolonged intentional abuse tantamount to torture’ to cats.

An RSCPA inspector attended the defendants’ home after receiving a call from the Little Tinkers charity.

Ellie was discovered with a broken leg; Coco, an eight-week-old kitten, died from a fractured skull and Lucifer had more than 18 fractures throughout his body.

The RSPCA initially received a call from Richardson, alleging that Symon had injured and killed a kitten by throwing it against a wall after they’d had a drink-fuelled row.

Symon told the police that Richardson had killed Coco by throwing her against a wall and door frame. She denied harming any animals.

An investigation was opened and ownership of five cats was signed over to the RSPCA.

A forensic vet concluded that the cats had sustained injuries in the care of both defendants. He was not satisfied that the injuries of Lucifer were consistent with a road traffic accident (as had been previously reported) and that suffering was experienced via fear, distress, and pain on three occasions within a six-week  period.

The offences were deemed ‘extremely serious’ and there were factors that indicated prolonged intentional abuse tantamount to torture.

The pair were banned from keeping animals for life and given 18-week prison sentences suspended for two years.

Dave Long, prosecution manager of the RSPCA, said: “This is a very successful outcome. I am particularly satisfied with the bans which will protect animals long into the future.

“On behalf of the RSPCA I would like to thank Marsden Rawsthorn and Carmel Wilde of counsel for the work done on this case – it’s very much appreciated.”