Home > Legal News > Compulsory ADR is around the corner

Compulsory ADR is around the corner 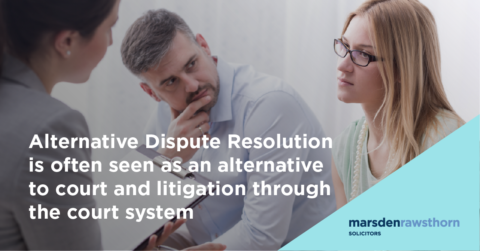 Have you ever been in a dispute that has found its way to court?

Those that end up going to trial will be aware how attritional, time-consuming and costly the court process can be.

Alternative Dispute Resolution (ADR) such as mediation has been around a long time.

It’s often seen as an alternative to court and litigation through the court system.

Judges have always been able to encourage parties to try to resolve disputes through ADR.

They can impose costs penalties if one party refuses to participate in ADR.

However, Judges have to date not been able to order parties to engage in ADR.

That may now change as a report from the Civil Justice Council has concluded that an order requiring parties to engage in ADR is not in breach of the Human Rights Act.

It is compatible with Article 6 of the Human Rights Convention

The report concludes that ADR can be made compulsory.

This is subject to certain factors and rule changes. These are now around the corner.

Chair of  the ADR Liaison Committee and Lead Judge for ADR, Lady Justice Asplin, said: “This report addresses questions which are central to the shape and design of dispute resolution in the twenty-first century.

“We have concluded that ADR can be made compulsory, subject to a number of factors.

More work is necessary in order to determine the types of claim and the situations in which compulsory ADR would be appropriate and most effective for all concerned. This is in both the present system and in relation to online justice.

“Our conclusions provide the opportunity to initiate a change of culture in relation to dispute resolution, to benefit all concerned.”

Focus moves from dispute to resolution

The focus will be on “resolution” rather than on “dispute”.

ADR will become an integral part of the court process assisting in resolving claims quickly.

This is at less cost before court proceedings are issued or at least before trial.

This benefits all concerned. In turn those few cases that are not resolved through ADR a smoother and quicker path to trial but at a cost.

Help is at hand

Here at Marsden Rawsthorn, we have always encouraged consideration and participation in ADR.

Statistically 70% of cases settle at or within a few weeks of ADR taking place.

We are happy to discuss explain the ADR process and the various types of ADR available.